The Thinkpad, first introduced by IBM over 20 years ago, is a much-beloved laptop, and for good reason. The division and brand, acquired in 2005 by Lenovo, is known for its reliability, build quality and durability. True believers keep coming back, eschewing fancier, flashier laptops for the solidity, reliability and workmanship of the ThinkPad.

So it is not lightly that Lenovo has approached the idea of change as they have sought to integrate their Yoga line of 2-in-1s with the venerable ThinkPad architecture. They’ve thought this through very carefully: to do injustice to the heritage of the ThinkPad would be to alienate their history and their base; to underutilize their very promising Yoga technology would be to shortchange their future.

It is onto this delicate tightrope that the designers and engineers of Lenovo bravely sallied forth in coming up with the ThinkPad X1 Yoga, a 2-in-1 that measures up to both past and future. 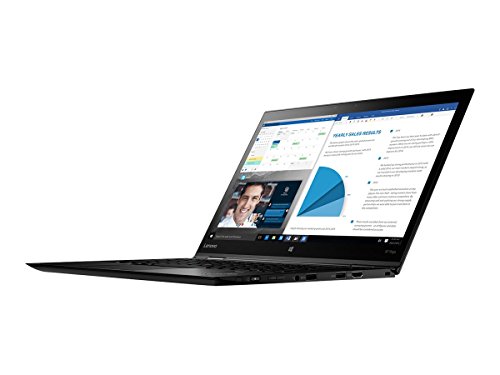 With a base model boasting an Intel Core i5 or i7 processor, 8Gb of RAM (up to 16Gb), and a 256Gb (up to 512Gb) solid-state drive, along with a gorgeous 14-inch HD display that also has an OLED option, the workmanlike bones of the ThinkPad are never far from the surface. But the Yoga’s personality is also apparent, most noticeably in the dual-hinge design that allows the screen to flip all the way open 360 degrees, allowing it to be converted into a tablet in an instant.

One especially clever bit of design work that went into the ThinkPad X1 Yoga is the keyboard’s retraction function: when you flip the display around to set it in tablet mode, the keys retract into the chassis and are inaccessible–one of those “why didn’t anyone ever think of that before” design triumphs. 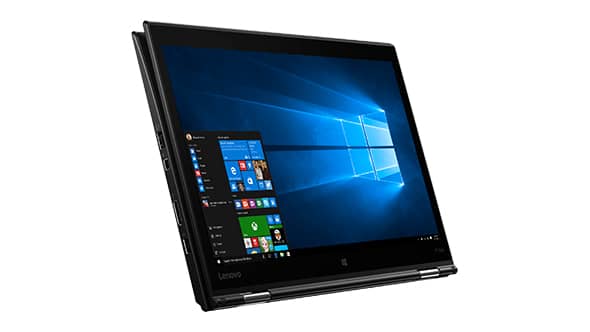 The black-matte finish is also pure ThinkPad, but with the ThinkPad X1 Yoga weighing in at a mere 1.27 kg (2.8 lbs) it would seem that the boxiness of the classic ThinkPad is a thing of the past. Though it retains the simple, clean lines of its predecessors, it measures a respectably slim 17 mm in height, offering tremendous functionality in a tight, trim package, that nevertheless has a solidity to it and never feels flimsy or delicate like some ultrabooks.

Billing itself as “the lightest 14-inch business 2-in-1” does not seem to be an idle brag. The machine is not as light as the lightest ultrabook out there, but on the other hand you’d be hard-pressed to find another 2-in-1 with the functionality and versatility of the ThinkPad X1 Yoga in such a small package.

It comes with a 14-inch touchscreen display is full HD at 2560×1440 native resolution, but the optional OLED display is even more gorgeous, with tremendously subtle shadings of black and the ability to render 99 percent of the AdobeRGB color gamut.

As mentioned before, the retractable, lift-and-lock keyboard works automatically when you flip the display around to tablet mode, and it is a godsend. It makes the machine feel more like an actual tablet as opposed to a clunky laptop in tablet drag, a sense one gets when using some 2-in-1s in tablet mode.

Lenovo has also included a handy stylus that stores securely and completely within the body of the keyboard base, whose function is graceful as well as useful. It allows the user to make the most of the touchscreen with fine-grained scribbling, writing and drawing.

Durability is a key component of what users look for in a ThinkPad. And they won’t be disappointed with the ThinkPad X1 Yoga–in fact old school ThinkPad acolytes may well be delighted at how this machine manages to retain the solid, grounded feel of the old tank-like ThinkPad, yet still come in weighing only 2.8 pounds.

Of course the big news about the keyboard is the aforementioned automatic retractable function when the screen is flipped to tablet mode. But beyond that, the dexterous way the engineers and designers went about creating the ThinkPad/Yoga mind meld is evident here.

For one thing, the keyboard is quite comfortable for even speed typing, with spacious keys and a roomy board, especially for a 14-inch laptop. And of course the TrackPoint nubbin still comes standard along with a nice-sized touchpad for mouse navigation. 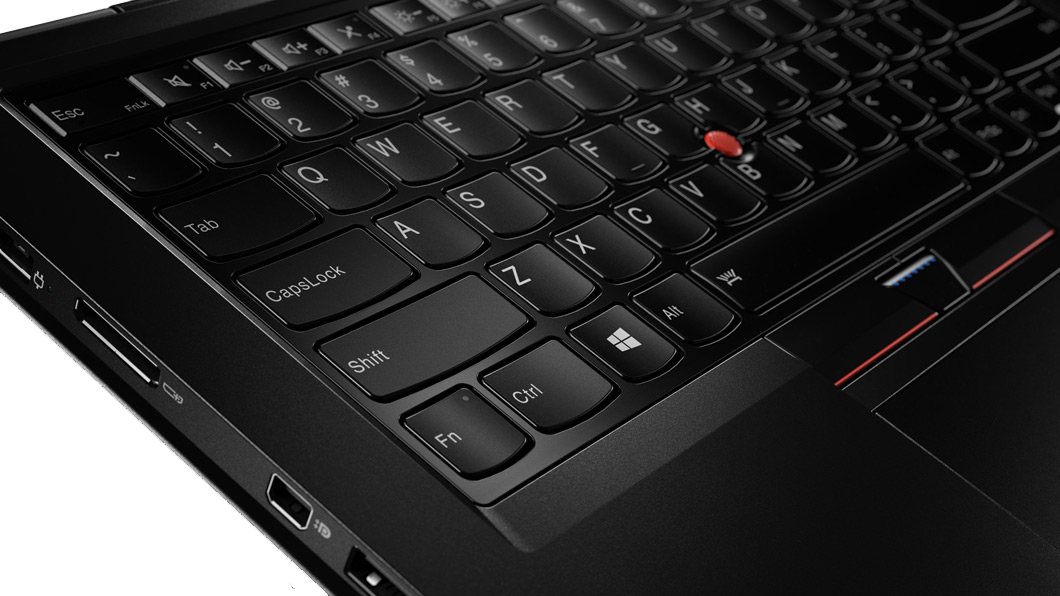 But then the new comes in to meet the old, with a lovely backlighting on the keyboard that has almost zero bleed around the individual keys.

The standard 2560×1440 full HD touchscreen display is brilliant and boasts tremendous color palette, with a 720:1 contrast ratio, which is actually better than the Microsoft Surface Pro 4. This version of the screen has a semi-gloss coat, and the touchscreen is quite responsive and has tons of sensitivity and plenty of touch points to make using it a seamless experience.

Use the Stylus Pen to Draw, Annotate, or Take Notes

The audio package features a pair of speakers at the bottom the Thinkpad X1 Yoga, providing adequate sound quality and volume for Skype calls and podcasts. You won’t be able to use the speakers to blast your favorite jams at a party, you can comfortably and clearly listen to music or watch movies with a friend or two.

The ThinkPad X1 Yoga comes standard with three USB 3.0 ports, HDMI, an audio out port and a Micro SD card slot. The webcam is 720p and quite good for a camera of this class, bringing home crisp, clean video and still shots. In conjunction with the digital array microphone, the system is more than adequate for business calls on Skype or chatting with family and sharing video and photos. 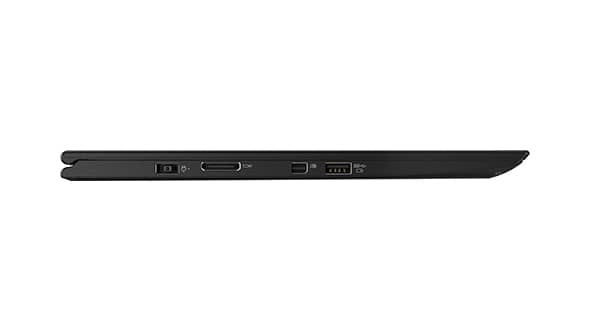 As far as performance goes, the ThinkPad X1 Yoga’s components tell the tale. The Core i5 processor–which is upgradeable to an i7 for a mere $160, by any measure a steal–is well-known to be a strong performer. In single-core benchmark tests the ThinkPad X1 Yoga running on the i7 consistently scores a close second to the Dell XPS, and within shouting distance of the Microsoft Surface Book. The 512GB SATA solid-state drive is impressively quick and nimble, and the graphics performance is excellent considering this is a working computer, not a gaming one running a separate graphics processor.

Speaking of! So this isn’t a gaming computer, therefore as mentioned above there is no separate graphics processor for amping up the latest games to the level that gamers expect. That said, the Core i7 processor gives the user great Intel HD graphics. As long as you’re not looking to play the latest 3D games this machine will suit you just fine.

The X1 Yoga comes standard with a 52 watt-hour internal battery, a fairly large one for a slim-profile, lighter machine like this. Lenovo claims up to 11 hours of battery life with the HD version, and up to nine with the OLED screen. Independent benchmark tests put the battery life on a par with the Dell XPS 13, which is much-praised for its battery life.

The ThinkPad X1 Yoga runs on Windows 10, and the stylus, a Wacom AES pen, runs on Lenovo’s WRITEr technology, allowing the user to write across hundreds of apps using almost any input field.

The warranty is a standard one-year warranty that can be upgraded.

In attempting to marry two discrete and seemingly opposing system types, Lenovo took a tremendous risk with its ThinkPad Yoga designs. In the ThinkPad X1 Yoga however, that risk has reaped great rewards. The user will be pleased with the ThinkPad’s reliability and performance, and just as happy with the Yoga’s versatility. This is a big win for not only Lenovo, but for the user as well.
﻿

How to choose USB Wi-Fi adapter for your laptop