Among the latest Lenovo products, a special place is reserved for Lenovo Z50-75 Signature Edition laptop which is positioned as an entry into the world of multimedia and gaming. This model has good performance in general, good hardware, good built quality, and all that for an affordable price of $449. Finally, we have a situation that for a quite affordable money, we can get a high-quality laptop with AMD Kaveri hardware in the combination with HD LED Display.

The design is pretty solid, giving the impression of more than acceptable quality. It’s all in black, so you’ll not be so much impressed with its design. The laptop has mostly a plastic workmanship, with a smooth surface on the cover and rough at the bottom but with the fine finish, so it gives the relief feeling under your fingers. The lid is a complete contrast as it’s almost entirely smooth which is interesting because almost all other Z50 models are with rough lid and specific pattern. The only distinguishing thing is the big Lenovo sign on the top right corner.

When you open the lid, we get a quite different picture. The matte surfaces are everywhere inside, with the exception of the frame around the screen, which is the shiny version of black plastic, the complete contrast to the outside. That’s not the only contrast since the palm rest is made of aluminum! Pleasant on touch, a beautiful impression that the user has when in the interaction with a notebook.

At the bottom, we found the battery (at the back) and Dolby speakers at the front. At the front, there are only two indicator lights. The cooling vents are on the left side.

Generally, we are satisfied with what we have seen in terms of its design, in accordance with the budget orientation and price category. 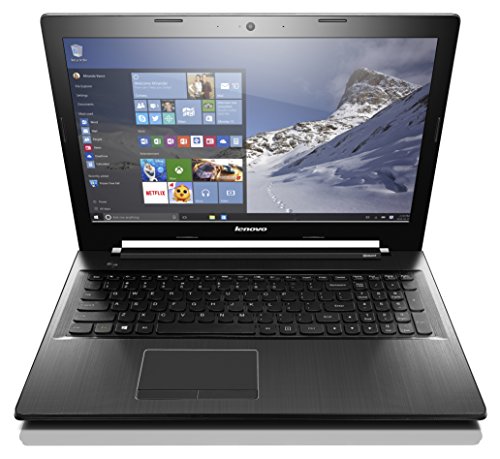 Lenovo Z50-75 Signature Edition laptop relies on AMD Kaveri platform, the latest iteration of the APU concept. It’s FX-7500 processor with high energy efficiency. Although some categorize it as ULV processor, still the consumption of 19 W is above the average for this category, which upper limit is about 15 W.

The default clock speed of this quad-core processor is 2.1 GHz, but, when Turbo Mode is activated, the clock speed reaches 3.3 GHz. APU is created using of a 28-nanometer manufacturing process. It has 4 MB of cache memory, doesn’t support Hyperthreading (i.e. a maximum of four threads simultaneously), and already mentioned 19 Watts’s TDP.

Z50-75 Laptop has more than enough of RAM memory. There is a full 8 GB of system memory, which is quite a nice amount even for the most demanding uses. We are sure that you’ll not seek for more memory.

The hard drive is a special story because it’s a specific model. Its 1TB SATA 5400 rpm model of a hard drive with 8MB of cache, which is completely quiet and highly energy efficient with a little amount of heat.

50-75 laptop relies on the integrated Radeon R7 graphics. Integrated graphics works at a frequency from 553 to 686 MHz and has 384 shader units. Supports DX 12 architecture and AMD Mantle technology. It uses the RAM system memory to perform graphical instructions and usually initially separates memory for its own needs. In applications with GPGPU support, is engages in the intensive calculations and significantly helps to speed up the certain operations. Since this is a lower-class graphics chip, to play games, it’s recommended to use the resolution of 1,280 x 720 pixels and don’t expect a great performance at a higher level of details, because you can play only demanding games from 2014. But, this graphic card shows excellent performance in multitasking, HD video playback, and internet browsing.

Processor performance is quite sufficient for all undemanding needs, but after a period of use, when algorithms recognize all files/applications you use most often, you will feel a real pleasure to work every day in the Windows OS. The hard disk provides quick responses, based on which you’ll feel like your computer “flies”. These drives are a really good alternative to SSDs, as they offer the significantly bigger amount of space as it always might be a problem, unlike desktop platforms where is still simple to add a hard drive.

Regarding the noise, you’ll be completely peaceful. AMD has fixed their weakness, in the form of thermal dissipation and consequent noise, many years ago, and now, this parameter doesn’t much separate them from the competition in the similarly configured computers.

Temperatures are also quite well, and regarding this issue, you shouldn’t expect any problems.

The battery is slightly lower, but not because of the hardware, which is at the same high level as on the competition, but primarily because Lenovo decided to implement a weaker battery. 4-cell battery of 41 Whr and 2800 mAh, Lenovo Z50-75 provides about 5 hours of autonomy. We recorded 295 minutes in the normal mode, which is relatively a fair result, but we really want to see what the autonomy will be with a bigger battery. We don’t have a doubt that laptop will reach full-time work, and maybe more, which will contribute to more positive image about AMD hardware.

A good screen is very important for the overall impression of the laptop and Z50-75 is very good at this point. It has a very slight glossy coating, fine brightness and contrast, so it gives a decent picture. It’s nothing revolutionary regarding 15.6-inches display, as it has HD Ready resolution (1366 x 768 pixels), so common for a laptop of its price range. But, it should be Full HD screen as the laptop has enough power to follow it. This would be great for the gamers and fans of multimedia and films, but unfortunately, it didn’t happen.

For complete audio experience, there is Dolby audio technology with automatic cleaning of the sound from a bad sound source in real time (eg. voice, while communicating via Skype). 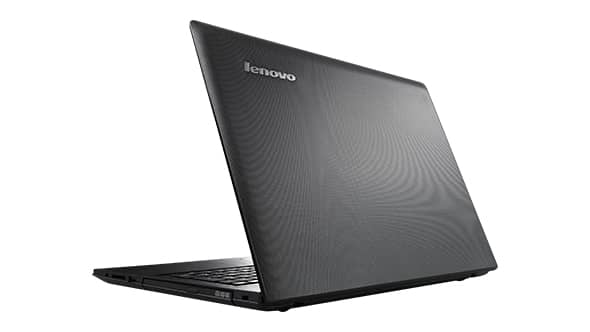 The keyboard is AccuType, with the numeric part and the specific shape that follows the form of fingertips. We tested a lot of Lenovo laptops keyboards for and we know how good they are, and we’re very proud that the company don’t make any changes on them, but only improves the existing concept. Because of the structure, there is a small dose of twisting, but nothing that can blur the great impression.

What is a little tricky, from our perspective, is the change the primary functions of F keys. Instead of classic “F1-F12”, these buttons by default have some other functions, while to access to the traditional “F” functionalities, is necessary to press the “Fn” key – so it’s the reverse from the standard. Thus, for example, to close an application, you need to press “Alt + Fn + F4” instead of just “Alt + F4”. Of course, the adaptation is going fast, but generally, you should know about this change. Also, the touchpad is very good and convenient, multi-touch controls work very nice, and the two big keys are below the surface of the touchpad. 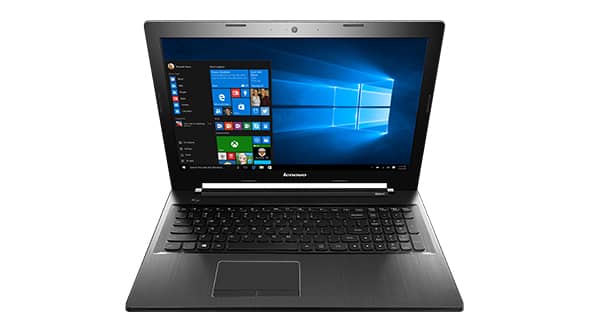 Lenovo Z50-75 has standard connectors and ports. On the left side, we found: a connector for the power adapter, VGA and HDMI outputs, a LAN port, and two USB ports: one USB 2.0 and one USB 3.0. On the right side, we found: DVD-RW burner, Kensington lock, card reader, audio connector and USB port, whose position is potentially problematic since it’s located in the lower right part, where there might be a conflict with the mouse which might be potentially used. 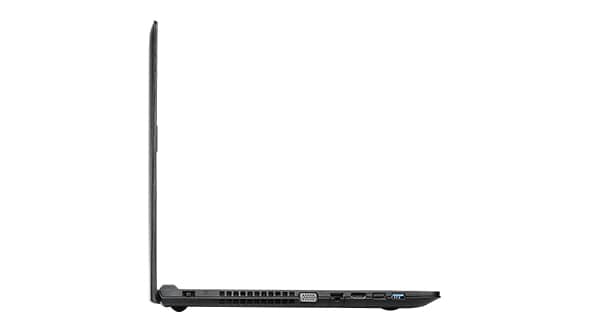 Lenovo has incorporated 720p CMOS-based web camera in tested Z50-75 laptop that is very good in coping with situations of poor ambient light, so the special praise goes to it.

The device is very well made, which was expected from Lenovo. Materials used are polycarbonates, including chrome strips and also the keyboard. The case is strengthened with metal inserts, but this is only for the sake of structural reinforcement. There is Kensington security lock which provides maximum security of your device.

Things are very simple. We really like Lenovo Z50-75. There are some weaknesses, which are the legacy of the old manufacturer’s orientation – to put the AMD hardware on cheaper configurations. There are some small objections regarding design and the battery with a small capacity.

The laptop has a quite good performance, in accordance with the description of Lenovo that Z50-75 is an entrance into the world of multimedia and gaming. There is also a spacious hard drive which gives a very positive impression in daily work. Finally, the laptop is a perfect balance of the price and what you can get for it, and we hope to see a lot of similar configurations in the near future. It definitely can take part of our top 10 laptops for 2019.
﻿